In demersal marine fishes, the dispersal of larvae determines the geographical scale of population connectivity, and larval behaviour may influence dispersal. Yet, little is known of the ontogeny of behaviours that can influence dispersal. The present study examined the development of these behaviours in pelagic larvae of tropical marine fishes (4–21 mm) that occupy non-reef habitats as adults: Eleutheronema tetradactylum (Polynemidae) and Leiognathus equulus (Leiognathidae). In the laboratory, critical speed (Ucrit) increased from 3 to 34 cm s–1 at 1.3–1.7 cm s–1 per mm of size, with the fastest larvae up to 50% faster. In situ speed increased from 4 to 25 cm s–1 at 0.7–2.2 cm s–1 per mm, and was 10–14 body length s–1 (60–90% of Ucrit). Endurance increased from 0 to >40 km at 2.4–4.7 km per mm. In the sea, orientation precision did not change ontogenetically, both species tended to swim in loops, and neither significant overall directionality nor ontogenetic change in orientation was present. Larval orientation of these non-reef species was less precise than that of reef fishes. The two species differed in depth distribution, and one ascended ontogenetically. These behaviours can potentially influence dispersal outcomes over the full size range of these larvae.

Behaviour that influences dispersal and connectivity in the small, young larvae a reef fish 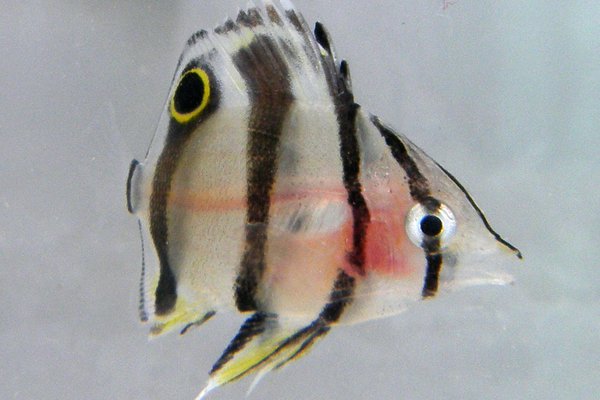 In his recent paper, Jeff Leis provides more information about the life of larval fishes.

Ontogeny of behaviour in larvae of marine demersal fishes

Are larvae of demersal fishes plankton or nekton?

Orientation of pelagic larvae of coral-reef fishes in the ocean